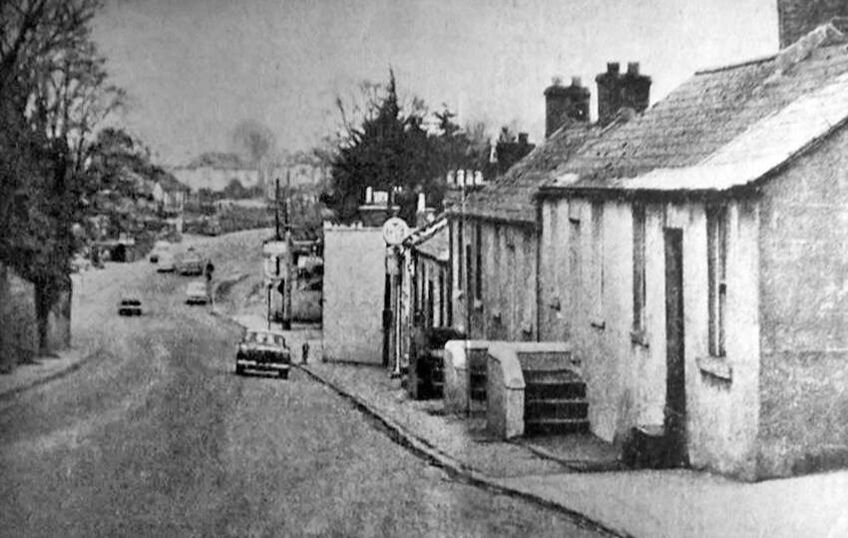 The Hill - Courtesy of Des Croasdell
Fire in Stillorgan 6 May 1761
Monday night a fire broke out in Stillorgan which entirely confirmed two houses and aged woman with three children, and two horses perished in the flames another child is badly burn and unlikely to survive.

James Cullen, James Flinton, James Hughes and Catherine Magrath, were indicted for sacrilegiously stealing out of the church of Stillorgan ten crimson cushions, the property of the churchwardens, and divers (sic) other cushions, the property of the parishioners, on the 30th April last.  The female prisoner was acquitted.  James Cullen, James Flinton and James Hughes, were found Guilty, and sentenced to seven years' transportation.  The female wept bitterly.
July 1824

Another case of violation of the grave has been stated to us.  The wife of a poor man, named Kinshella, died in her confinement, about a fortnight since, and was interred in Stillorgan church-yard within the ordinary period afterwards.  The infant survived, and was put to nurse by some person interested for the parents, but it also died on Thursday morning last, and left the poor father deprived of every object of affection.

It appears that the loss of his wife made a deep impression on the unfortunate man, for he frequently visited her grave, and could not even mention her name without weeping.  He had made one of these melancholy pilgrimages of affection to the place of the dead, at a late hour on Thursday evening, and contemplated the burial of his child in the same tomb the ensuing day.  Under the influence of his affliction, and the association connected with her grave, it is not wonderful that the feverish sleep of the mourner should be troubled by dreams of his wife.  He thought she presented herself before him in a shape less that life, but in her accustomed dress, and with an aspect of profound anguish, as if for the child which she seemed to hold affectionately folded in her bosom.  She did not seem to speak to him, nor could he address her, and he awoke with affright.

He slept again, and again the same distressing vision presented itself, and he again awoke alarmed.  In short, still as he gave way to sleep the vision returned, and, at length, effectually roused by his fears and sorrow, he arose.  As soon as daylight arrived, he visited the church yard, and found, to his great horror, that his wife's grave had been plundered of her body, and the earth and coffins, and dead garments, strewn about the place, in the brief interval of his absence.

It would be utterly impossible to describe the unhappy man's distraction.  The interment of his child has been deferred.  He learned that previous to nightfall, three young men, recognised as students, had been seen driving near the church-yard on a jaunting cart.  The outrage has been ascribed to them, and the poor man has lodged informations at College street police-office of the fact, to enable him to get authority to search for the body of his wife, which we should suppose is totally unfit for dissection, from the degree of decomposition which must have taken place during a fortnight's inhumation.  We have never see a more pitiable martyr of grief than the unfortunate Kinshella.
March 1831

Valuable Paintings - And a question of ownership 1840
​
In December 1840 a case was taken by Boles Reeves of Linden, Stillorgan against Philip Morris.  Mr Reeves was described as a gentleman of some property and a retired solicitor.  Mr Morris dealt in pictures and represented himself as an officer of the British army though born in America.  He said he had been struck by the same ball that killed General Ross and now when he now took wine, it went to his head!  This caused an outburst of laughter in the courtroom.   The case was about some paintings that had been seized by the sheriff from Mr Morris's premises and Mr Boles was claiming ownership of them.

One of the pictures in this dispute was "Mercury instructing Cupid" by Corregio and was thought to be quite valuable as even Mr Seagrave from the National Gallery had called to Stillorgan to see it.   According to a witness (the son of Mr Reeves) this painting had been one of forty two paintings given to Mr Morris to clean and it was alleged that Mr Morris had sold on one of the Corregios for 50 pounds.  In total eighty paintings had been seized from Mr Morris's premises.  It turned out that Mr Reeves and Mr Morris were friends, who "supped and dined together" and there was even a possibility that they bought paintings together, but the case has some great one liners and some wonderful repartee.

Various people were called as witnesses to identify the paintings and declare that they had originally sold them to Mr Reeves.

One of the witnesses when asked had he ever seen an original painting replied.  "I would not swear it was an original unless I saw the man painting it".   It seems that Mr Reeves may not have been a very good judge of paintings after all and an expert who when asked by the judge to value this collection of paintings replied, "My Lord, if I had plenty of money, I would not buy them at all".

Maybe not so valuable after all.

Mary M, a healthy woman , age 30, in July 1842, came to the Stillorgan Dispensary.  She said her mount had been full of pins: that she had accidently swallowed one, which was choking. Dr Field immediately relieved her by using a probang (a elastic tube which is inserted down the throat).  In the following October, he was requested to visit her as a dispensary patient; she then told him that she was in the greatest agony in her hip-joint,  extending down the limb on the same side.  He immediately bled her largely from the rm, had her cupped over the seat of pain, and gave her two grains of opium,  The next day, she has had some short sleep, but the pain was still very great.  After exhausting every means he could think of, narcotising, mercurialising, blistering, and tonics, Dr Field at length advised her to try a hospital.  After submitting to various remedies in Steevens' Hospital, without more than temporary relief, she was advised to go into the county for a change of air, being greatly emaciated.  She cam again, dreadfully reduced in flesh, to the country, where Dr Field say her,  but did nothing for her; and after remaining some time at home, suffering still from what appeared to be severe neuralgia, and being much reduced, she one day felt a sudden remission of the pain, and three days later after, it left her.  From this time she rapidly recovered her health and strength, and was soon able to leave her bed.  Shortly after, she found ed she called a sore pimple on the inside of her thigh, which she poulticed  and plastered but could not cure; and having quite regained her strength, after an illness of eight months, she walked to the dispensary.  On examining the pimple, Dr Field found in its centre a sharp point; and after a little, he extracted by its point, a large pin.  Dr Field thought the the simulation of idiopathic disease, for so long a time by a foreign body, rendered it extremely interesting, and established the possibility of a common pin, after being swallowed, emerging from the surface of the body.
London Journal of Medicine A Monthly Record of the Medical Science 1842.
​
An Inquest 1869
An Inquest was held in Blackrock today by Henry Harty, Esq., on the body of a child found in Stillorgan Churchyard, name unknown.  The finding was that the child was still-born.
May 1869
​
A Charming Incident 1904
(On 2nd May 1904, the King, Edward VII, and his wife Alexandra visited Ireland,  arriving at Kingstown.)

"A charming incident attended the King's drive to Leopardstown on Saturday.  It is thoroughly well authenticated, about 100 yards beyond the village of Stillorgan some children had taken up places on the top of the high wall surrounding Stillorgan Park, formerly the residence of Sir Benjamin Lee-Guinness.  A little boy had gathered a capful of field daisies and primroses, and as the royal carriage passed beneath, he threw the flowers over the King, who was seated on the left side nearest him.  The other occupants of the carriage-the Queen, Princess Victoria, and the Lord Lieutenant-laughed heartily at the king's efforts to remove the daisies from the brim of his hat and the collar of his coat, where most of them had fallen when tossed when tossed into the carriage by the King's little Irish subject, who hailed the success of his manifestation of loyalty with a wild shout of jubilation.  That is one of the experiences the King enjoys, when it comes spontaneously, as in this case."
June 1904