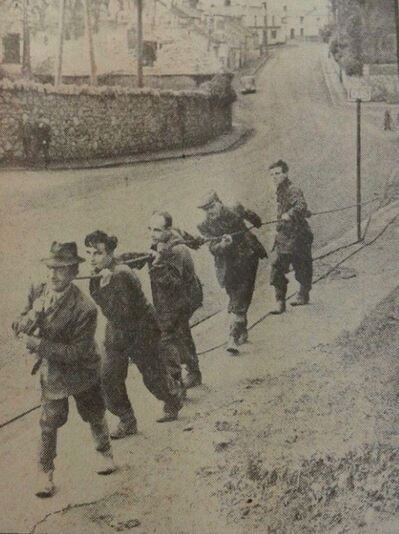 Telephone Cable laying Stillorgan 1949
1900/1901
Stillorgan gets gas street lighting.
​
1901
Death of Queen Victoria on 22nd January is marked by a service at Stillorgan Parish Church on the 27th January.

1902
26th June is the Coronation of King Edward the VII and  is marked by a service at Stillorgan Parish Church on August 11th.
Water from Darley's Well is deemed undrinkable and the door on it is locked.
Water fountain erected at Brewery Cottages.

1922
Michael Collins car is ambushed at Pim’s Gate in Stillorgan, attacked by 5 men, 20-30 shots fired and a bomb thrown at it.
Widows in both Stillorgan Church and All Saint's, Blackrock are smashed.
William Moore, land Steward to Henry Seymore is murdered at his home in Stillorgan.

1923
Rev E H Lewis-Crosby is incumbent at Stillorgan Parish Church. (He takes over from Rev Kennedy - his  family are buried
​in the graveyard.)

1924
Sunshine home is built (across the road from its present position).

1926
January - Major flooding in Stillorgan area, O'Rourkes Cottages in Dundrum evacuated and Linden Convalescent Home under
8' of water; patients sent home or back to hospital.
In Stillorgan Parish Church, a snake is discovered asleep in a pew after an evening service, whether his sleepiness was  due to the heat in the church or the length of the Canon’s sermon, we can only guess.  Apparently it had escaped from a nearby car.

1931
Archbishop of Dublin visits Stillorgan to dedicate a table at St Brigid's Church.  He recommends that the Whately window should be
replaced.
William Orpen dies age 53 in England and is buried in Putney Vale, Wimbledon.  He had fallen out of public favour at this time after an attack on his character by John Rothenstein of the Tate gallery (his nephew) citing his ‘divided loyalties’ to Britain and his native Ireland.

1932
​The Whately east window at St Brigid's is replaced by a window in honour Dora Florence Cornwall (the one with the hen).

1937
Land acquired at Beaufield by Council to build 40 houses.

​1942
Rev Lowe resigns and the vestry note that they were “in sympathy with his patriot motives in wishing to serve in the Royal Army                Chaplin’s department and serve overseas on active service in the present war”.  Rev Cave is new incumbent and wishes to live at                the rectory.  Lady McLaughlin’s tenancy of same is to cease.

1948
The chapels of ease at Kilmacud and Mount Merrion are amalgamated into a single parish.

1949
Kilmacud House and lands is sold by Col Dwyer to the Sisters of Our Lady of Charity, who in turn donate the land for the
building of the new St Lawrence’s Church.  The house itself to be preserved for elderly ladies.

1950
Christian Brothers buy Oatlands.  19 Children in St Brigid’s school.  River is culverted and sextons house is demolished.  As                          pressure increases for more homes, both public and private, the large houses, farms and estates of Kilmacud are sold off.  By the                end of the 60’s extensive suburban development replaced all the agricultural land with the exception of Airfield. The Kilmacud                    Stream which rose at the former lakes of Lakelands is put in culvert for its total length as far as the Glaslower.  Its tributaries                    have also since been culverted with the development of Stillorgan and Sandyford Industrial Estates.  Beaufield Mews restaurant                  is opened and in 2020 when it closes it is considered "The oldest restaurant in the Dublin area".  Priory Grove built.
Canadian Red Cedar house go on sale on the Lower Kilmacud Road.
Houses on Merville Road go on sale for for £1950
Bungalows go on sale at Linden Lea for £1950
​
1951
Attendance in St Brigids one Sunday is 104, and there is 27 on the school roll.  Merville estate is built on land owned by the Jolly                family.
Dale Drive is completed.

1952
Consecration of addition to graveyard by the Archbishop of Dublin - Arthur Barton.

1953
Burton Hall is bought by Col Joseph Hume Dudgeon and he moves his riding school there the following year.
Foundation stone for St Therese Church in Mount Merrion is laid by Archbishop McQuaid.
5th Annual Mount Merrion Horse Show takes place in Stillorgan Village.
Tender issued for houses to be built on the Morrow site.

1954
Ormonde Cinema opens in August and L Cosgrave performs the official opening.
December, torrential rain causes flooding. The N11 as it is now (close to where the Radisson is now) is under water disrupting                    travel. The Trimleston culvert was unable to cope with the amount of water running off the Mount Merrion housing estates.

1956
John Purnell Purnell-Edwards dies at the Rectory and is buried in Stillorgan graveyard.

1960
Tigh Lorcain Hall is sold to the developers of the Bowling Alley.  New Bray Road Dual carriageway is under construction.
St Philomenas is home to 13 boys.

1961
Proposal to raise 10K to build a new parish hall at St Brigids.
​
1962
Glenalbyn is sold by the Wilkinson’s to a Captain Hartman of Germany.  He sells off part of the land (6.5 acres) to the GAA who were            looking for playing fields, and finally sells them the remainder.

1964
Kilmacud becomes a parish in its own right.
​
1965
The rubble from the demolishing of Moores Cottages (from Oatlands to the Kilmacud Road) is used to fill Kilmacud Crokes playing fields.  The houses took three days to demolish as ex tenants looked on distraught.  Nineteen families are initially rehoused in porto cabins at the back of Linden Lea before being housed in Patrician Villas and Beaufield, but the village community spirit was shattered.
​
1966
Stillorgan Shopping Centre is officially opened in December by Sean Lemass.  Mrs Lemass unveils a beaten copper
sculpted centrepiece called "The Fiddler of Dooney" by Imogen Stuart, inspired by W B Yeats poem of the same name.
The De La Salle Brothers open St Benildus College to provide secondary education for boys.

1967
Credit Union set up in Stillorgan.  Glenalbyn House is set up as a community Centre for local families.
Church of The Guardian Angels opened and bless by Mosr Rev John Charles McQuaid on 5 Nov 1967.

1968
Oatlands House is demolished to make way for a Christian Brothers Monastery.  Colaiste Eoin and Colaiste Iosagain built in the                grounds of St Helens.

1971
The Sisters of the Handmaids of the Sacred Heart of Jesus open St Raphaela's to provide an education for girls.  Kilmacud
​GAA is renamed Kilmacud Crokes.

1972
The new Mint is constructed at Sandyford, UCD water tower is built and Stillorgan Library opens.

1976
St Anne’s becomes St Michaels House Group.  On the 21st July Christopher Ewart-Biggs the British Ambassador to Ireland is                      killed by the IRA on Murphystown Road in Sandyford while exiting his residence, Glencairn House.

1980
Some of the Leopardstown Park grounds sold off.  The IDA buys it to build the South County Business estate and the money is                    held in trust to deal with claims. The Glaslower is culverted from Sandyford village as far as Brewery Road.

1986
Rev Alastair Graham is the incumbent in St Brigid’s.  Hurricane Charley hits and the culverted river of Stillorgan erupts through                    manhole covers and drains.
Blackrock Market opens on 6 Dec 1886.

2004
The Luas goes into operation with stations at Sandyford and Stillorgan opened.

2005
Dundrum Town Centre opens.  Construction of the M50 is completed.

2007
Stillorgan floods again, up to half a meter of water in Orpen and Avoca Park and again manholes turn into fountains.

2012/3
300 year Celebration of the Church building at Stillorgan.

2016
Bowling Alley site is sold to the owners of Stillorgan Shopping Centre.

2017
Redevelopment of the Stillorgan Shopping centre gets underway, statue of Sir William Orpen to be installed is rejected by the new owners.  Stillorgan Gate Housing estate  underway beside Hazelwood House.  Trees are cut down despite an order for retention.

2021
Bowling Alley Demolished in May